The 8-foot replica of the Ad Astra statue in McPherson, Kansas. Photo by the author.

What do you think of when you imagine the Topeka skyline? Can you easily call to mind the figure that commands the sky? That figure is a 22 foot-tall sculpture of a Native American holding a bow and shooting an arrow into the sky. In 2002, the Ad Astra (“to the stars”) figure finally made its debut on top of the Topeka capitol — over 100 years after the state government first commissioned a statue. Originally, however, the symbolic figure intended to crown the capitol was Ceres, the Roman goddess of agriculture. Public opinion shifted before the idea was executed, though, and it was not until the late 1980s that local artist Richard Bergen from Salina started work on the Ad Astra figure that currently stands atop our capitol.

I am an undergraduate student majoring in English Literature. This semester I received an Undergraduate Research Award from K-State’s College of Arts and Sciences for my research on the Native American figure situated on the Kansas capitol dome. My interest in the relationship between regional identity, indigenous history, and public memory was sparked during a Native American literature course with Dr. Steffi Dippold last semester; I am continuing my work on this project with her. In my research, I examine why and how Kansans decided that a (token) indigenous figure wielding a bow and arrow represented them best. How conscious were people about their motives and biases? What does it mean that we know so little about this figure? On October 20th I visited and interviewed the 92 year-old artist, Richard Bergen, to better understand the cultural, artistic, and local processes of public memory, of whom we decide to remember and whom, or what, we choose to forget. 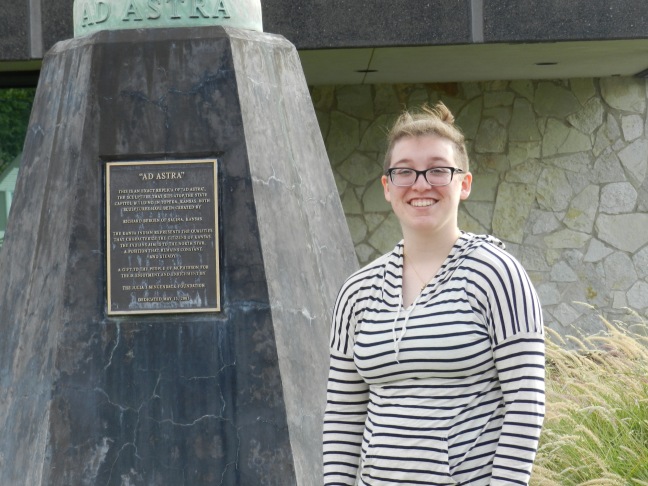 Cheyenne White pictured with the plaque commemorating the donation of the 8-foot replica of the Ad Astra statue in McPherson, Kansas.