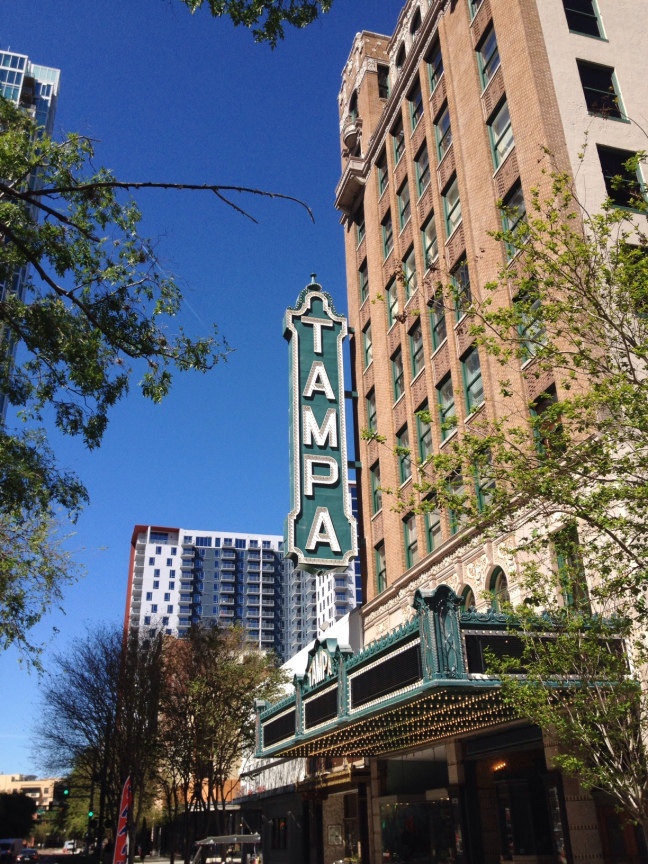 Thousands of creative writers descended on Tampa this week for the annual AWP Conference. We asked three Kansas State graduate students to weigh in on their conference highlights — so far anyway.

The Fifth Annual Rock and Roll Reading took place in Ybor City — a pocket of Tampa where stray roosters strut past strip clubs and cigar shops. The location was The Reservoir Bar — a dive bar lacquered and fumigated with cigarette smoke — a bar crowded with bikers, pool players, pub-crawlers, and, for that night, many many writers.

There were Rock and Roll legends, too. Jim Warner belted out his homage to DLR (David Lee Roth). Mo Daviau regaled us on Elliot Smith. Megan Giddings gave a shout out to Coltrane.

I don’t really know the definition of Rock and Roll. But as far as writing goes, this definitely fit the bill.

In “Writing Fatherhood: Changing the Metaphor,” a panel consisting of Shane Seely (MA ’98), Geffrey Davis, Douglas Brown, Steven Church, and Jarod Rosello read from their own works as well as other father/writers. Their goal was to create a new metaphor for fatherhood, and they were inspired by last year’s keynote speaker, Chimamanda Ngozi Adichie, who called for more men to write about fatherhood, Seely said in his opening remarks.

The fathers spoke of the beauty and fatigue of fatherhood: checking that doors and windows are locked, conjuring playful voices that give life to stuffed animals, and sharing sleepless nights with sleeping rascals sandwiched between them and their partner.

Writing about fatherhood, they’re sure, wrestles not only with their own sons and daughters, but with their own fear-soaked images of fatherhood that children want to call “love.” Recalling prenatal parental moments, Church reflected on the sonic connection he latched onto, his only relationship through sound and sound-generated images.

“The Literary Twitterati” was a panel with Kaveh Akbar (@KavehAkbar), Eve Ewing (@eveewing), and Dorothea Lasky (@poetastrologers), the reigning royalty of Twitter, poetry, and Twitter poetry. Ewing, in her opening remarks, called poetry an “ivory tower.” People in the room nodded when she said that — we are familiar with that idea. But then Ewing, in her graceful and assertive and ultra-engaged manner, said, “I need to trouble something you just said.” She talked about growing up in Chicago, and writing and performing poetry on the streets with her friends. For her, poetry wasn’t an ivory tower until she was 23 and attending her first AWP. She remembered “some of the best poets in the world” reading their work and the audience sitting, listening in silence. Then, and now, she rails against that kind of experience; poetry should be community and voices and excitement.

This panel, more than the other ones I’ve gone to, offered all of that: community and voices and excitement. The room was electric, even though it was also the smallest panel I’ve been to — maybe 30 people. People all around me snapped their fingers while the panelists spoke. We collectively gasped as Dorothea Lasky read her poem “Snakes“ (“Oh, write what you are, poets / Everyone’s a snake / Most of all, including you”). The room was full of audible affirmation and acknowledgment.

The panelists talked about social media, and there was the obligatory conversation about Rupi Kaur, but mostly this was a panel about how amazing and important it is to be able to share what you love with the world. So when Kaveh Akbar shouted this James Dickey quote to the room: “Poetry is just naturally the greatest god damn thing that ever was in the whole universe,” it was all I could do to keep from shouting back, “Yes! Yes, you are right!”

One thought on “Dispatches from #AWP18”