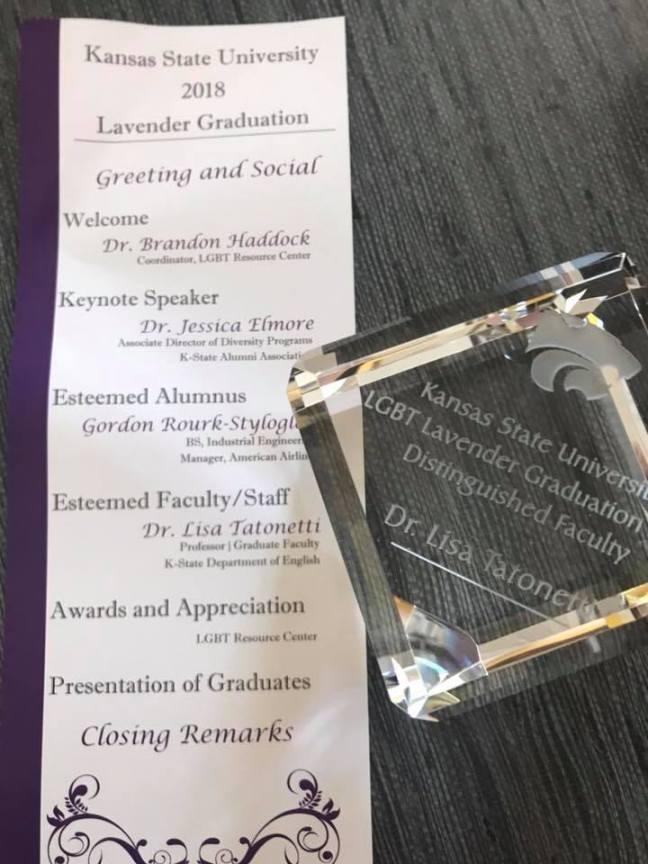 I shared the following remarks on the occasion of the Ninth Annual Lavender Graduation at K-State on Sunday, May 6, 2018. Given the current political climate in Kansas toward queer folks, as evidenced by the passage of SB 284 by the Kansas legislature, the sentiments here are particularly pressing.

I want to begin by recognizing that everywhere we stand is Native land. We’re here today on the ancestral land of the Kaw, Osage, Delaware, and Pawnee, and the current home of four federally recognized Indigenous nations: The Kickapoo, Iowa, Prairie Band Potawatomi and Sac and Fox.

Kansas State University exists, then, as part of a history of settler dispossession that we all take part in by virtue of our being here, living here, working here, studying here, and today, graduating here, on this land that was undeniably gained through a troubled and troubling history of relocation, coercion, and physical and mental violence.

So while I want to celebrate our land grant history, which is intended to be inclusive — as many of you know, K-State was founded in 1863 as the nation’s first land-grant institution. The original mission of your soon-to-be alma mater was laudable: K-State’s goal was to educate members of the working class, offering them the luxury of an education previously reserved for the upper echelons of society.

And furthermore, the university had its first African American graduate, George Washington Owens, in 1899. Owens, the son of ex-slaves, graduated with distinction from K-State at a time when segregation was the law of the land. So on one hand, then, the rich history of the school from which you proudly graduate is filled with possibility, with broad-minded ideals, with hope, and, importantly with the potential for inclusive vision and positive change, while on another it’s built on pushing folks out, on exclusion, on seizing resources and othering not just individual human beings but whole nations of people.

As we sit here today at Lavender Graduation and look toward the future, I want to call for us to acknowledge and, whenever possible, redress such injustices even as I simultaneously suggest we embrace and build on the many and varied possibilities we encounter. To do so, we might consider what queer theorist José Esteban Muñoz has called “queer utopias.” Queer Utopias, those spaces in which we, as lesbian, gay, bi, trans, non-binary, queer, intersex, ace, and/or Two-Spirit people can, to use Muñoz’s word, “imagine better, imagine differently.”

In these creative imaginative queer spaces, we must refuse to erase difficult realities. So, as you’ve already heard, I won’t just sit here because it’s a graduation ceremony and throw rainbows at you. In fact, by contrast, I’d argue that “imagining better, imagining differently” requires us to acknowledge that we inhabit a place of contradiction, and that contradiction is, unquestionably, the circumstances of your graduation in this fraught year of 2018.

It would be disingenuous to elide the difficulties queer folks face living through this Trumpian moment in the U.S. Since last year’s election there’s been a significant increase in LGBTQ people reporting discrimination. A recent poll cites a number of 55%, 11% high than the previous year. Furthermore, amidst the rising national and international tensions of transphobia and homophobia and xenophobia, queer folks of color and undocuqueer folks are especially at risk.

In Kansas specifically, 2017-2018 saw anti-trans legislation with our Republican party developing a particularly heinous homophobic and transphobic party platform. We also saw attempts in the Kansas legislature to hinder queer-identified folks from adopting or fostering. If we add to that Trump’s attempted court-ordered ban on transgender people serving in the military or, closer to home, the homophobic graffiti that appeared yards from where we gather, we see how incredibly pressing, how absolutely essential it is to imagine better, imagine differently.

Because of that, while I recognize and name this mess of painful experiences that you had to live through, I still want to follow Muñoz and posit queer utopian possibilities. And I particularly want to situate that possibility in you. Each of you. You’ve been essential to making change at K-State. To putting queer people and issues in the spotlight.  To helping K-State be named one of the top 25 LGBT-friendly campuses in the country. To making the administration recognize that the time has passed for weak statements about diversity that exclude the rich, deeply intersectional queer realities of this campus, this city, and of the larger world we live in.

Whether you’ve been starting or supporting organizations like SAGA (Sexuality and Gender Alliance), FIRE (Feminists Igniting Resistance and Empowerment), OSTEM (Out in Science, Technology, Engineering and Mathematics), or the Gender Collective, or holding signs, writing letters, making phone calls to your representatives, or just living your everyday life as queer students and allies at K-State, you literally embody, you hold within yourself, the joys and possibilities, the queer utopias that Muñoz calls us to envision.

Because at this point in the game it’s not my generation that’s going to make a difference — it’s yours. I stand before you as a 52-year old bisexual, cis-gendered, white, 1st gen, scholar-activist in queer Indigenous studies. I am committedly single, purposely child free, and I participate in neither hetero nor homo imperatives for monogamous couplehood. In many ways, my life is frankly not what this world sees as a norm. But while I may live outside certain boxes, I’m not the one that’s going to imagine new worlds into being. That, my friends, is up to you.

Envision your diploma as the passing of that baton in a key segment of a cross-country race. As you pick up that hard-earned credential, I want you to really think about the fact that you hold not just a piece of paper, a record of completion, or even a dreamed-of outcome — you hold the promise of queer futurity, in your hand and in your body.

I know it may not feel like it at times, but look around the room: YOU are the Marsha P. Johnsons, the Harvey Milks, the Gloria Anzaldúas, the Ellen Degenerises, the Brandon Haddocks, the Essex Hemphills, the Laila Irelands, the Jasbir Puars, the Gordan Rourk-Styloglous, the Janelle Monáes <add your much hipper examples here>. I have absolutely no doubt, in fact I am placing my money on that fact, that YOU can and will imagine better, imagine differently, in so many more ways than I can begin to envision. Ultimately, it’s your knowledge, your degree, your beliefs, your voice that will imagine and enact our queer utopias in the 21st century.

Thank you and congratulations!