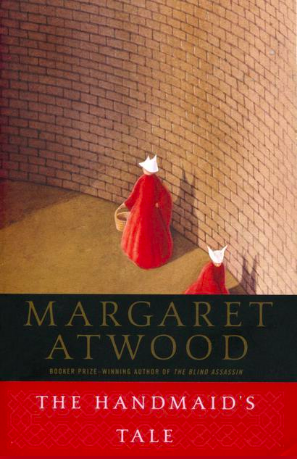 Margaret Atwood’s 1985 novel The Handmaid’s Tale has received many accolades. Among others, it was nominated for the Booker Prize and won the Arthur C. Clarke Award. Now our Graduate Track in British and American Literature has selected it as our focus for the 2018-2019 academic year, following on last year’s celebration of the bicentenary of Mary Shelley’s Frankenstein.

The time seems ripe to revisit the novel, which appears in the news as much for inspiring activists and Hollywood producers as for its status as a dystopian work of speculative fiction. Atwood actually discusses Shelley’s Frankenstein in a PMLA issue on “Science Fiction and Literary Studies” and locates science fiction in the mode of The Pilgrim’s Progress, because, for her, science fiction can “explore the relation of humanity to the universe in graphic ways, an exploration that often takes us in the direction of religion and can meld easily with mythology” (515). We plan to engage with Atwood’s exploration by analyzing the novel and its cultural contexts.

We held our first event of the fall on Thursday, September 27, the day the Senate Committee on the Judiciary interviewed Professor Christine Blasey Ford in the hearing on the nomination of Brett M. Kavanaugh to the Supreme Court of the United States. Once again activist handmaids were in the news as we turned our attention to adaptation and conversation. 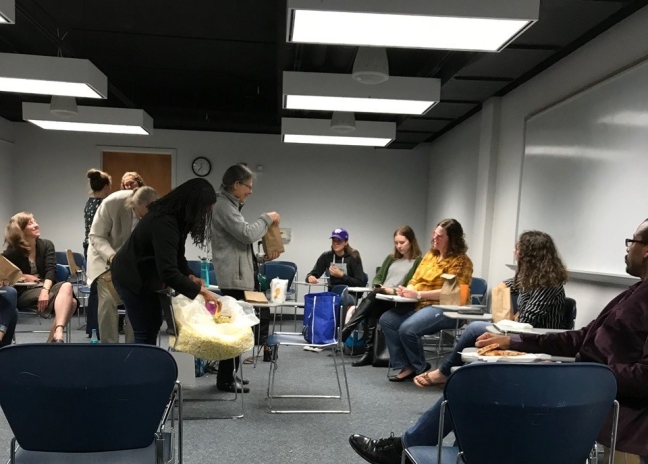 We shared pizza and popcorn, screened an episode from season 1 of the Hulu series, gave away copies of the novel as door prizes, and reinforced literature’s role in building communities, inspiring art, and creating and transforming culture.

“Blessed be the fruit,” says one handmaid to another in both novel and episode, a terrifying parody of the Beatitudes, but Atwood’s novel has borne especially rich fruit. Stay tuned for upcoming Literature Track events as we subject Atwood’s novel to sustained close readings, discuss different approaches to the novel and its fruit in lightning round talks from faculty and students, and discover together the graphic novel version forthcoming in March 2019.