As a student of English and Gerontology, I find myself constantly explaining and justifying my course of study to others. These subjects aren’t normally associated with each other and rarely overlap. I’m interested in how aging and older adults are portrayed in film and television. To put it simply, I tell people that I am a storyteller, using my English background as a springboard into quite a few different subjects.

When I got into Gerontology research my freshman year, I was terrified that I wouldn’t be cut out for it. I had grown up being taught that there was a distinct difference between STEM and the arts and that people were either a part of one group, or the other. However, when I got deeper into the qualitative studies, I found that my close reading skills and ability to articulate ideas in writing were crucial to my research. An important part of the research process is communicating your findings to team members, colleagues, and members of the public.

While wrapping up a meeting last week, my research professor and I discussed the importance of accessible science. Some scientists get caught up in the jargon of their own fields and don’t make their research accessible to others outside of their field. To me, an integral part of research is the ability to spread knowledge and understanding, and research isn’t doing its job if only a select few can understand it. 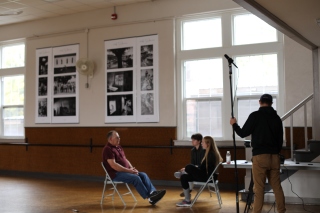 This summer I took part in an interdisciplinary project concerning the 1918 influenza. I was taken on as a video production intern;  my job was to create a video explaining the findings of the team’s research to the public. I saw myself as a translator of sorts, taking the highly technical slang and converting it into something that was more digestible to the public. The goal was to elevate the knowledge of the public, rather than to talk down to them and lose them in the jargon. The project is still unfinished, but I am hopeful it will reach its audience.

My cross-disciplinary attitude is reflected in my class schedule. With all of the incredible classes at K-State, I felt it would be silly to be limited to my own department. Over the past few semesters, I have relentlessly emailed and begged my way into uniquely beneficial classes in many different departments. I’ve tailored my schedule to be as strangely specific as my goals, my favorites being a Digital Ethnography class where I lived in Meadowlark Hills retirement community for a semester and made a short film about my experience, and a Mass Communications class where we are making a documentary about how older adults survive in rural food deserts.

Everyone should seek out classes that help you reach your goals and challenge yourself, rather than settle for what’s easy. The university has far too much to offer than to limit yourself to just one subject: the future depends on it.