For 19 years, the Gordon Parks Museum in Fort Scott, Kansas, has hosted the Annual Gordon Parks Celebration, honoring the Fort Scott native who made history as a groundbreaking Black photographer, filmmaker, author, musician, and all-around polymath.

Parks was not only born in Fort Scott, and is buried there, but he wrote about it in his autobiographical novel The Learning Tree, and chose to shoot on location when he adapted the book into a landmark film.

This year I was able to share a panel with Kansas State Beach Museum Curator Aileen Wang and Collections Manager Sarah Price, as we presented the work we have done at Kansas State to advance Parks’s legacy.

Parks was no stranger to K-State; the university bestowed him with an honorary degree, and he left several photographs to its archives. He later composed a photo essay on Manhattan for the Mercury, which is now in the museum’s care.

For Kansas State, 2021-2022 was a year-long commemoration of all things Gordon Parks.

The Beach Museum mounted an exhibition of rare photographs, accompanied by the recent work of local photographer Doug Barrett, and it launched an open-access digital exhibition catalog including scholarship of Parks’s work as a photographer, novelist, and filmmaker. McCain hosted a multimedia concert featuring award-winning jazz musician Terence Blanchard with a digital art staging designed by Andrew Scott and K-State Professor Matthew Gaynor, with the help of K-State students.

This fall, the English Department is launching a website on the making of The Learning Tree, available to scholars as well as the general public. The website features behind-the-scene photos of the shoot, interviews with cast members, and memories of people who grew up in Fort Scott. English faculty members Cameron Leader-Picone, Mark Crosby, and I directed the work of undergraduate interns and researchers in preparing the video, audio, photographs, and text that are part of the website. 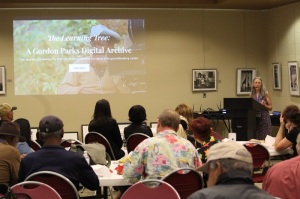 The Learning Tree: A Gordon Parks Digital Archive is very much a living tribute, and we look forward to adding material.

It was an honor for me to introduce the website in Fort Scott, and particularly gratifying when several people in the audience spoke to me afterwards about adding their own stories about Parks and Fort Scott.